Nearly 50 years after it was founded in 1969, Olympic Hills Golf Club (Eden Prairie, MN) underwent a renovation that took the better part of three years (2013 – 2015). Reopening in the summer of 2015, Olympic Hills now offers one of the most mature courses in the state, as well as enhanced practice facilities, state-of-the-art fitness and yoga centers and a variety of engaging social activities. 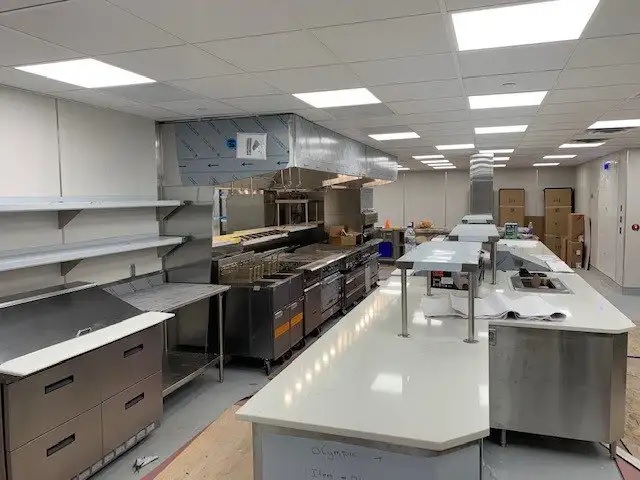 In July of 2019, Robert Machacek, Boelter’s Contract Sales and Design Project Manager, was approached by the owners of the Olympic Hills Golf Club to review the existing kitchen and begin preparations for a complete overhaul and update of the facilities. Construction of this considerable effort began in February of 2020.

Understanding that time was critical, Robert and his team immediately began working through the initial planning stages and were able to complete the project in April 2020, followed up soon after (July/August) with a high-end table and chairs package for the main lounge area. This allowed the staff at Olympic Hills ample time to prepare for a variety of upcoming corporate parties, weddings, anniversaries and other celebratory events.

Throughout the entirety of the project – from early designs, equipment selection and installation – Robert worked closely with Kevin Petroske, Executive Chef of the Olympic Hills Golf Club. Because this effort was intended to be a complete overhaul of the existing kitchen space, an initial walkthrough and inspection was conducted as a means to earmark any cookware items and equipment that could be salvaged for continued use.

With an eye toward continued safety and ongoing efficiency, approximately 15% of the existing equipment was able to be repurposed. Although some of the newer equipment easily made the cut, it was still important that anything that was saved would not take away from the aesthetic vision that Chef Kevin and the owners of Olympic Hills had in mind for the renovation.

“I knew before starting this project that it was going to be a monster undertaking and that with the tight timeline, we needed to have every “T” crossed and “I’” dotted.  The health department had shared their concerns with me, and I knew I needed to work with a company that is experienced in industrial kitchens.”

The focus of the project was to significantly update and expand the existing kitchen, as well as provide the club room with a renewed style of high-end finishes. The primary goal? Enhance the function, flow and ambiance of what inevitably would be a busy workspace.

The redesigned kitchen space would provide for greater organization, improved control of the ordering process and a reduction in cook time. As the planning stage progressed, Robert and Chef Kevin worked side-by-side to ensure that every detail of the function and flow of the kitchen was addressed.

The updates to the kitchen were specifically designed so that Chef Kevin and his staff could more effectively cater to large events. Key to this initiative was the installation of a brand new, 20-foot plating area. Providing multiple options for plate warmers, refrigeration and sauce plates, its design was intended to make catering to banqueted events a seamless and skillful process; allowing meals to be prepared and delivered quicker while ensuring the food is kept hot and fresh.

From the main chef’s counter, scullery and banquet plating, to the walk-in refrigerator, hood systems and signature chef’s table, every square foot of space was taken into consideration during the design process. The back of the kitchen was removed and additional space was added, complimenting the layout and enhancing the efficiency of the flow when in full operation. Upon completion of the schematic plan, the individual details were put into place and the work was able to begin.

DETAILS THAT MAKE A DIFFERENCE

As milestones were met, it became apparent that no detail was to be overlooked. Anything and everything was up for consideration.

It’s widely known that the chef’s line takes a considerable and consistent beating throughout the normal course of business. For this reason, the stainless-steel top – commonly used in nearly every other restaurant kitchen – was replaced with MSA quartz; a material known for its high-density rating, resistance to heat and cold and ability to withstand the test of time. The decision to use MSA quartz highlights the continued focus on quality and an incomparable attention to detail. 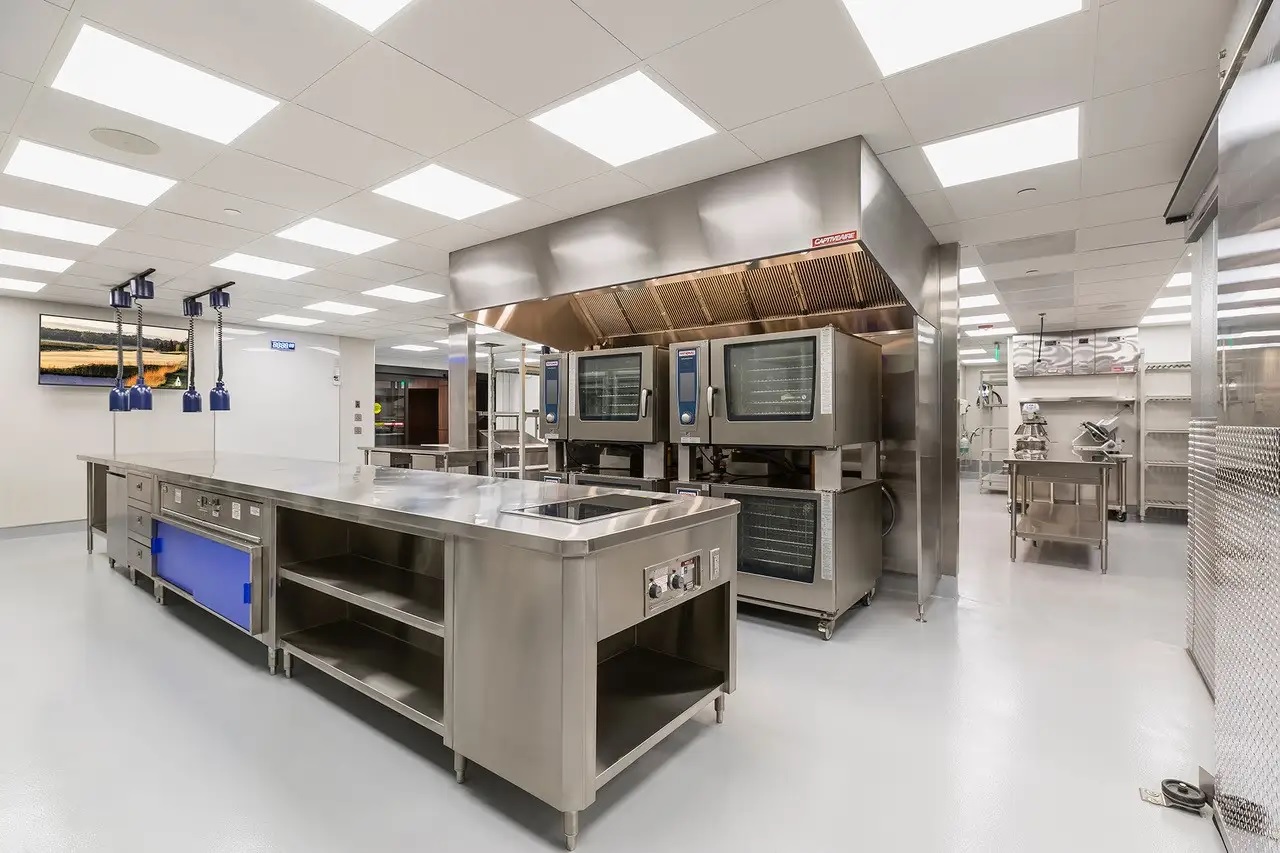 “We had to make multiple changes to accommodate the health departments requests for delineating boundaries for the Chefs table. We were able to bounce around options and landed on moving the chefs table and adding telescoping glass doors. They were also trying to limit the use of faux marble countertop. Robert was able to give them the specs to the material that backed up our assertions that it was nonporous and durable enough for the application. His experience with working with the Health department made it possible for us to have the beautiful counters that were so important to the look and operation of the kitchen.”

Like any other major kitchen remodel, the Olympic Hills project was not without its challenges. Understanding that there are significant benefits to working with a warm plate versus a plate at room temperature, it was identified early on that a better plateware storage solution was needed. In response, heated plate storage cabinets were installed, both at the main chef’s table, as well as the banquet tables.

Providing easy access, the warming cabinets are able store up to 400 plates, heat adjusted to nearly 100 degrees. The under-the-counter design keeps things neat and orderly, while providing a solution designed to reduce heat transfer – from food to plate – and maintain a more enjoyable dining experience for the guests. Adding powder-coating color to the front of the cabinets was a final touch that ensured a consistently neat and clean look with the rest of the kitchen.

While efficiency and workflow were always top of mind during the Olympic Hills Golf Club project, Chef Kevin insisted that safety be a priority as well. When preparing meals for large groups, it is essential that the food being served maintains the highest levels of integrity. Installing a HACCP monitoring refrigeration system ensures the food is kept fresh.

Acting as the main cooler, built-in technology monitors and advises the user of any power outages and/or disruption in functionality. Consistent temperatures are achieved and reports can be run, verifying any noteworthy fluctuations.

Installed as a means to preserve the overall health and quality of the food, it also allows for greater control of the kitchen through remote, App-integrated functionality. Perhaps most critically, the intelligent refrigeration provides the Olympic Hills kitchen the ability to print out functionality reports needed to expedite health and safety inspections.

Breathing new life into the Olympic Hills kitchen space was a primary objective. But, it was the consistent attention to detail that Robert and his team provided the biggest impact. As such, even the simple notion of maintaining and delivering ice became a valued point of discussion.

Ice plays an important role in the continued success of the Olympic Hills Golf Club, especially when the need for ice is spread out across the club’s various hot spots. Boelter’s solution was to add an ice-carting system that significantly eased the burden of ice transportation.

Rather than continuously filling and maneuvering ice buckets from one location to the next, a cart on wheels was added to the project’s list of equipment. It was a solution that allowed the ice to be poured directly from the cart, providing greater flexibility and quicker service to the bar and kitchen. Designed by Cambro, the ice cart is well insulated, ensuring the ice stays frozen for longer periods of time. 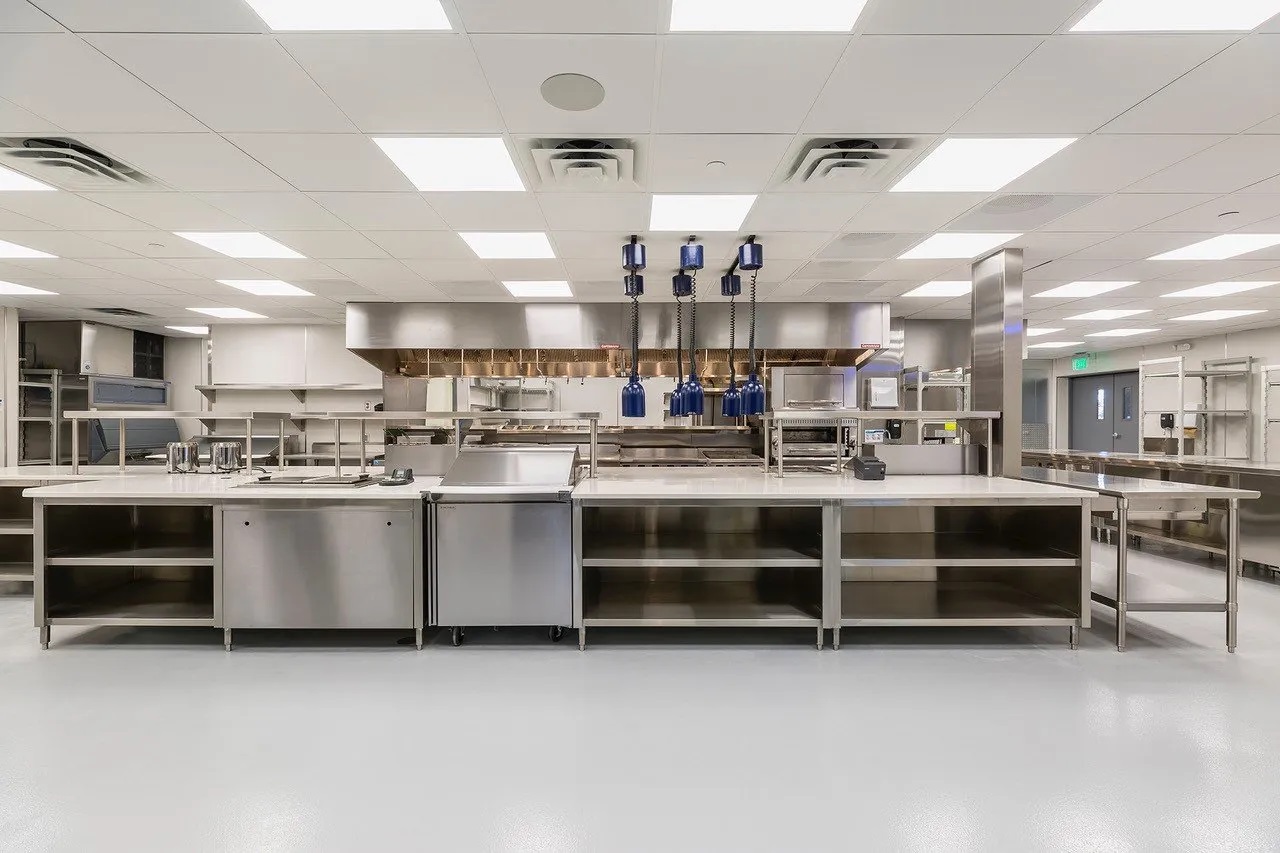 The impact of the Olympic Hills Golf Club project can be felt almost immediately. Members will enjoy a renewed clubhouse and inspired dining experiences from the various updates to the decor, finishes and comfortable club chairs.

Just off the dining area is the chef’s banquette, with a glass wall that mechanically opens to a chef’s island. Behind the scenes is a package of high-end equipment that includes combi ovens, deck broiler, braising pan, beer cooler, high-density shelving and a large combination walk-in with rolling door for ease of delivery and storage.

The entire project has been designed to promote enhanced aesthetics, greater cooking and prepping efficiencies and a consistently smooth workflow, culminating in a kitchen-to-table delivery system that is second to none.

“It was a really good experience working with Robert and Boelter. He was professional and shepherded the process with all parties to include our management team, equipment vendors, health department, contractor and subs. Working with Robert and our health department allowed me to continue to develop a good relationship with them as they had complete confidence in the process. The finished product is amazing!” 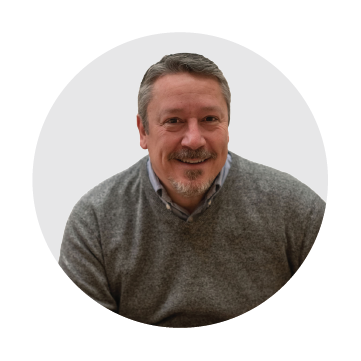 Read more about Robert Machacek, and see some of his extensive project portfolio.