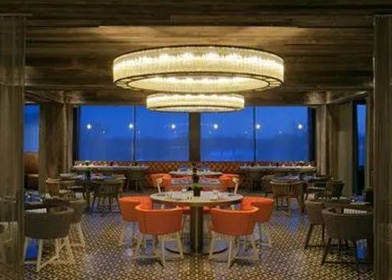 Food Service Equipment & Supplies Magazine named FireLake Grill House & Cocktail Bar the 2014 Facility Design Project of the Year. Boelter’s Contract and Design Specialist, Rick Grabinger, was a key player in the development and implementation of this award-winning concept. Located in the Mall of America in Minneapolis, Minnesota, the completion of this project and the recognition of FE&S helped to solidify Boelter’s position as a national presence in the Contract and Design arena.

FE&S Magazine looks for projects that make efficient use of labor and space. The kitchen and bar designs at FireLake Grill do just that. Long, narrow spaces and an open kitchen concept forced the team to get creative with equipment size, placement and custom fabrication. Initially brought in to work on the kitchen design only, Rick was able to grow Boelter’s involvement in the project by bidding and winning the design services for the 43 foot bar and the dining area. He worked closely with Food Service Consultants at Robert Rippe & Associates and Chef Paul Lynch. Rick assisted the design team in developing an innovative kitchen footprint and equipment layout to support the menu, production, and service.

The result—with two-thirds as much space as its sister restaurant in Downtown Minneapolis, FireLake Grill at the Radisson Blu can put out twice the volume. Everybody wins!

Rick says that being recognized by our peers from a design standpoint is wonderful. But, in the end, he is most proud of the fact that the kitchen and bar layout at FireLake allow the staff to work more efficiently and provide a memorable customer experience.