Case Study: The Wealshire at Medina 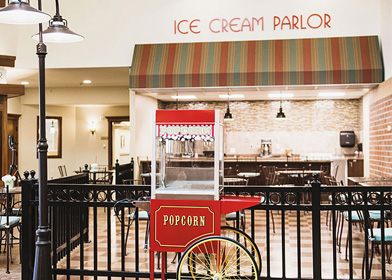 ABOUT US / PROJECT PORTFOLIO / THE WEALSHIRE AT MEDINA

The Wealshire at Medina – Creating a Space for Fun, Fellowship, and Comfort

When you walk into the Wealshire of Medina in Medina, MN, you immediately find a hub of activity. A theater, casino, and ice cream parlor are just some of the areas that make up the town hall in each residence hall. Organized to accommodate residents at different stages of Alzheimer’s or dementia, this memory care facility has labeled each residence hall a “household,” with each household having access to a town hall, which helps create a sense of community among residents.

“The ice cream parlors that are part of these town halls set up service every day around 2:30, with an old-fashioned soda shop feel,” says Cory Wiskow, vice president, the Wealshire of Medina. “It gives residents something to look forward to – a gathering time and chance to be around other people.”

It’s not just the ice cream parlors, but also each and every meal served, that provides an opportunity for fellowship. “Mealtime is such an important aspect of daily life at our facility,” Wiskow says. “Coming together around great food provides nourishment for the body as well as the soul, and because of that we strive to provide meals that taste and feel like home.” 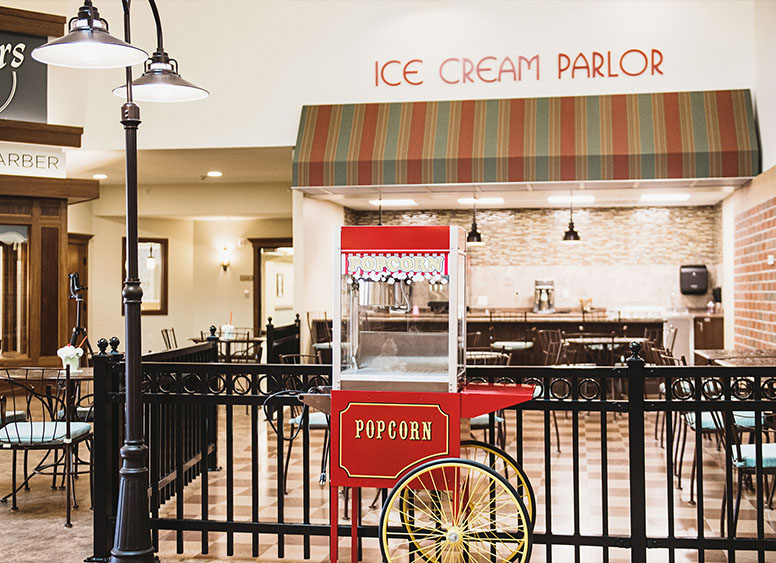 When Wiskow began 2018 construction plans for the Medina location, Todd Olson, project manager at Boelter Premier, was one of the first people he turned to. “Todd and I have worked together on other projects, and I knew I wanted him and his team on this build,” Wiskow says. “There are so many individual details that make his team great at what they do, but overall, I know I can depend on them to have knowledge of the industry, making things go smoothly and get the project across the finish line without a hitch.”

Olson and his team from Boelter bring an understanding of the senior living foodservice industry to every project. Early in the process Boelter’s knowledge base helps create kitchen designs and workflows specific for each facility. In the case of the Wealshire, one kitchen supports eight separate service areas. Olson identified and sourced equipment necessary to keep food at proper temperatures – hot or cold – while being transported and served to each of the eight locations, from hot carts to warming cabinets and steam tables.

In addition to his design expertise, Olson has strong relationships with equipment manufacturers and a vast knowledge of the category, enabling recommendations to support the variety and quality of food necessary for the Wealshire’s residents. And at the end of the project, Olson was there to walk with inspectors and answer any questions or tend to last minute issues. “I know I can count on Olson to be with us through to the finish line,” Wiskow says. “He always made himself available when inspectors were coming to look at the foodservice areas so he could be on hand to answer questions and take care of issues.”

Designed with an Eye for the Future

Having worked together on previous projects, Olson had a clear idea coming into the Medina build of what Wiskow’s goals were. “We had designed similar facilities so I knew their preferences for design and equipment,” Olson says. “One thing that was different in this build was the amount of space we had at our disposal.”

The kitchen at Medina is 2,200 square feet, almost double the space of the facility Olson and Wiskow had worked on together for another location in Bloomington. Part of the reason for such a big kitchen area was the plan for expansion of the Medina facility. “We currently have about 55 residents, but the plan is to eventually be able to provide for 140 residents,” Wiskow says.

With that in mind, Olson designed the kitchen with an eye on expansion. Storage space and refrigeration were sized to accommodate future growth. In the meantime, the chef and his staff enjoy the additional space. “There is enough counter space to be able to move around easily during food preparation,” Chef Kang says. “It also helps with keeping the place clean, as we have enough storage to put everything away when not in use.”

Boelter recently completed the first expansion on the Wealshire at Medina. The facility originally had four serving areas and two ice cream parlors when it was built in 2018. In 2022, construction was completed on four more households, which meant Olson and his team oversaw the addition of four serving areas and another ice cream parlor. “Thanks to the original planning on the part of Boelter, the kitchen was already equipped to handle the extra load from the new households,” Wiskow says. 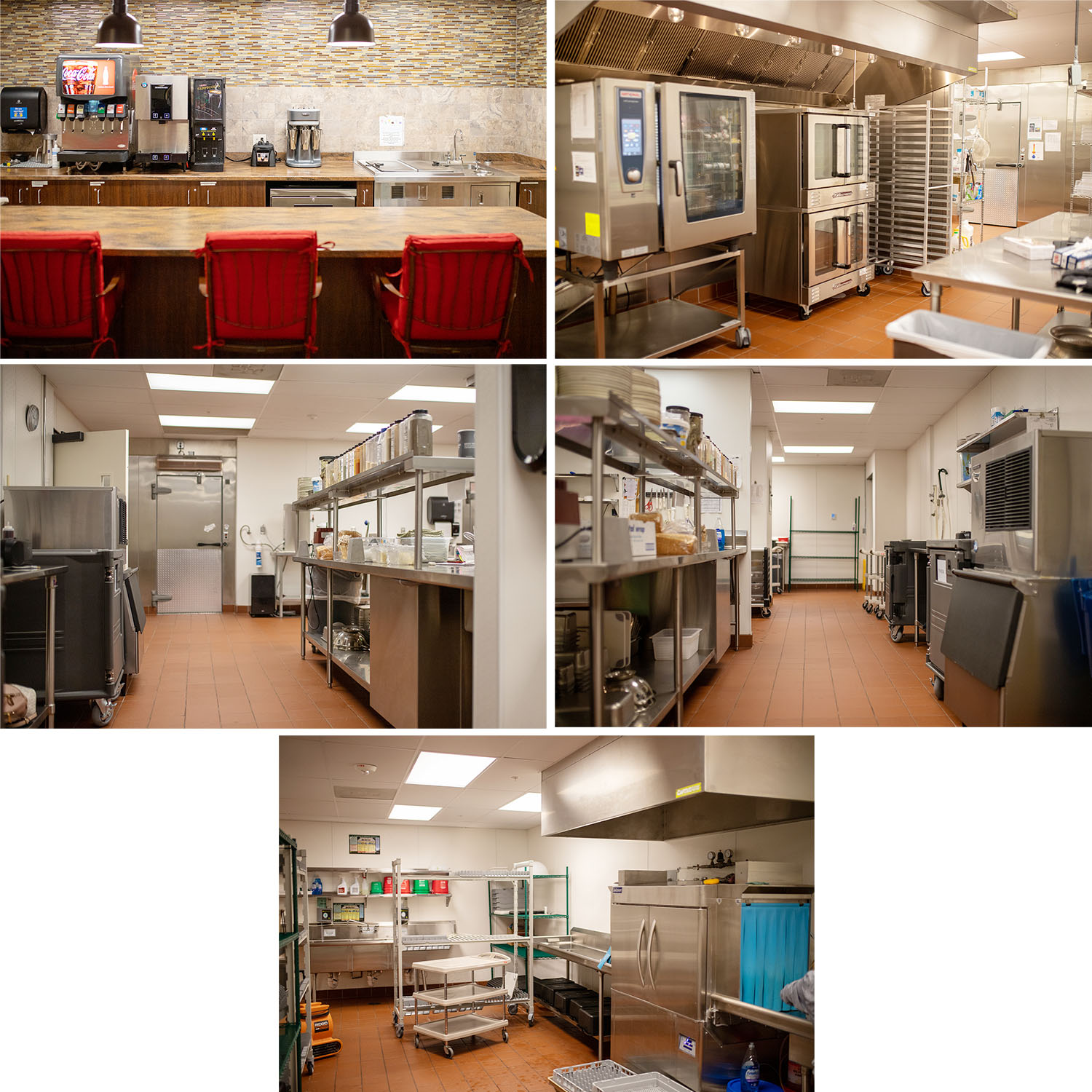 The Right Equipment for Great Meals

Quality meals are an important part of the experience at the Wealshire at Medina, and the equipment in the kitchen helps make it easy for Chef Kang and his staff to meet that goal. Two things are important when working to plan the equipment for a kitchen at an assisted living facility – size and flexibility. “One of the first things I do is make sure the equipment is sized right for the number of residents that need to be served,” Olson says.

After size, Olson looks to include equipment that will allow the chef plenty of options in creating different menu items for residents to have variety in their diet. They also need to be able to adapt to a number of different types of diets, to accommodate special medical needs or dietary restrictions.

Olson recommended a combi-oven for the Wealshire at Medina, and Chef Kang enjoys the ability to steam, roast, smoke and bake all in one piece of equipment. He also likes the large flat-top grill, which allows for a variety of menu items, from French toast and pancakes at breakfast to sandwiches and quesadillas at lunch and dinner. “Having the right equipment makes the job go a lot smoother,” Chef Kang says.

When residents come to live at the Wealshire at Medina, Chef Kang meets with them and their family. “I ask them about their dietary needs, and their food preferences, but I also make sure to ask what their favorite foods are and get some recipes,” Chef Kang says. “I want to make sure everyone in the household has something they can look forward to on the menu.”

From family casseroles to ice cream sundaes, food is an integral part of the experience at the Wealshire at Medina. And thanks to the Boelter team’s expertise, the facility is well equipped to make it all happen with ease and convenience. 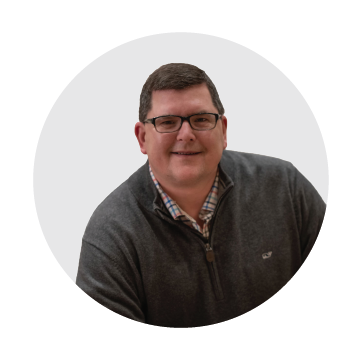 Read more about Todd Olson, and see some of his extensive project portfolio.